Eggs and muscle building have long been linked. Everyone is familiar with the cringe-worthy portrayal of a muscle-laden man slamming down a glass of raw eggs on workout day. While this image has fallen into the realm of being a stereotype, there is some truth behind the unusual snack and building muscle. The ‘raw’ part may be as unnecessary as it is unappetizing, but eggs (fully cooked!) can give you a boost for muscle growth.

First, let’s look at a few misconceptions about eggs…

Over the recent years, eggs have gained an unsavory reputation due to their high cholesterol content. It has been speculated that consuming eggs will lead to high cholesterol and cardiovascular disease. At a quick glance, it makes sense that eating more cholesterol would raise someone’s cholesterol levels. However, it’s not as clear cut as that, and science refutes the claim. In a Food and Nutrition Database Research Center at Michigan State University study that included over 25,000 participants, it was found that those that consumed more than four eggs per week had a lower mean serum cholesterol concentration than those who ate less than one egg per week (1).Eggs will change cholesterol levels but not in a way that negatively affects health. Studies have shown that getting a high cholesterol intake from eggs leads to bigger particles of LDL. This is the ‘bad’ cholesterol but when the particles are bigger, they are less likely to build up into plaque on artery walls. More importantly, it causes more HDL to be produced in bigger particles, making the HDL more efficient at removing cholesterol from the bloodstream (2).

All-in-all, they are not bad for you.. 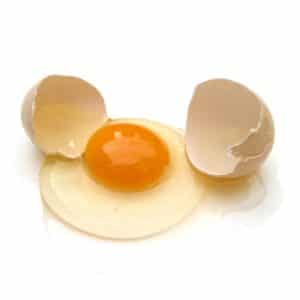 If you’re looking to build muscle, eggs actually have quite a few benefits. This is especially true for egg yolks. Many people who eat eggs will take the yolk out and eat only the whites but by doing this, they’re only getting half the benefits of the meal.

An average egg has 6 grams of high quality protein and this is the most obvious benefit because protein is well known for being a vital part of muscle growth. Roughly half of that protein content is contained in the yolk. By taking out the yolk, you turn a great source of protein into only a moderately good source of protein. More importantly, yolk contains all the cholesterol and is high in saturated fat.

Why are cholesterol and fat good?

With both high quality protein and the elements needed for testosterone production, egg yolks are a helpful muscle growing additive to a healthy diet.